So after spending two weeks at The Edinburgh Fringe in 2015, and nearly losing my mind, I am back here again for an entire month with my show ‘It’s Better to Lie Than to Tell the Truth and End up Alone in a Ditch Crying.’

I am up here with To The Moon, a theatre production company, and staying in a lovely house with some lovely female solo performers (and like 2 boys, but they don’t smell). (More info on To The Moon and the awesome female solo shows they have brought up here ) (too many brackets Ellen, this is upsetting for people who understand grammar).

But this time I am more mentally prepared, my expectations are lower and I read this whole book before I got here about performing (which was actually about tennis, but as a metaphor for performing so maybe I am good at both now?).

You smile and shout something inane at them about your show, and they take a flyer so you will stop following them down the street screaming ‘it’s about honesty, and you will learn something, AND I’M SO ALONE.’

I just normally end up chatting to slightly exciting/eccentric people, who won’t see my show but who seem like they have had interesting lives. Like the woman who was traveling around Europe on her own, because she ‘had no friends’ (her words not mine, guys) and who I promised I would be friends with. Sadly she was leaving that night, to return to Turkey, so we had a selfie to commemorate our brief friendship, made up a handshake, confessed our darkest secrets and never saw each other again.

I did my first show at The Cellar Monkey aka The Argyle Bar (to the locals). It’s preview’s at the moment, so apparently it’s hard to get people in, and my venue is a little bit off the beaten track, past The Meadows, so again, another reason audiences might not come. Also, who am I? I ain’t got my fancy stars on my flyer or poster. Sure, I won a design a dress for Barbie competition when I was younger, but they don’t know that.

I am hoping that people confuse me with Ellen DeGeneres, the way they do on Twitter, and come to the show.

Also to make it even tougher, I was competing with a pub quiz last night. And everyone kept telling me how good the pub quiz was, and I was like, ‘fair enough, that does sound like a pretty good quiz.’

But HUZZAH, I had five people in, three I knew (two from my lovely production team of To The Moon), and two genuine real audience members (one of them thought she was seeing another show, but I’ll still take it) and you know what guys – we all had a lovely time.

Myself and one of my To The Moon ladies Fiona (very talented lady doing a comedy character show) at the Free Fringe launch party last night. We got free hamburgers.

My sister has been sending my inspiring images to help me with the rising panic.

Someone pointed out to me that I have no pupils, and now I am worried I am maybe blind, but just really good at imagining what the world looks like. 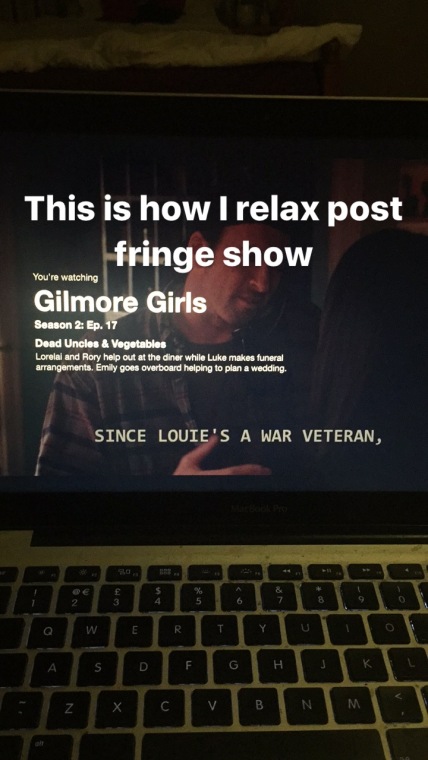