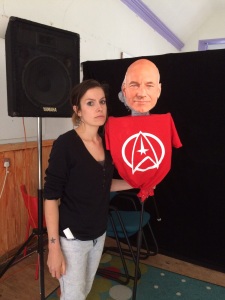 There were 15 other flyerers there yesterday, and we all stood like zombies outside the exits, manically clutching our flyers, trying to shuffle in front of each other and practicing our pitches.

Then the doors opened. And all hell broke lose.

The unsuspecting audience, innocently chuckling to themselves about the show they had just seen, were all instantly bombarded by flyers for other tangentalliy related shows, performers (like myself) who were desperate to steal a little bit of Austentatious’s hard earned glory. The terrified audiences all shook as we threw flyers at them and screamed “IF YOU LIKED THAT THEN YOU WILL DEFINETELY LIKE JANE AUSTEN IN SPACE/JEREMY IRONS THE MUSICAL/IMPROV PHILIP LARKIN/MY SHOW ABOUT STAR TREK!”

Though the following conversation with an audience member did take place:

Me: “Free show about Star Trek.”

Him: “Have you got anything else as bizarre to offer me.”

I am so glad he can’t see it it guys, because if that concept blew his mind, then what would happen if he found out about the time I changed a tyre, watched a Western or fucked a guy in the butt.

(Well not ever. I did agree to do it again for the 50th Anniversary of Star Trek next year at the Cube)

Then what? Then what do I do? Oh yeah. Go back to my temp job. My normal life without hills and sleep deprivation and small bottles of wine in a bag and crying on stage and buckets. I fear I will get confused and stand by the door after a day at work with a bucket, asking people to fill it. I would definitely like to do another show at Edinburgh. I think. I don’t know what about yet, but I started making a list of possible subjects

But I don’t think I want to not do it alone. I would really like to have some kind of performing partner. How do I get one of those? I know you its meant to happen organically, but if you live in Bristol and you want to write some funny/silly/moving/inspirational stuff with me. A show for Edinburgh 2016, or Bristol, or anywhere, then drop us an email via my contact form. Or if you know someone, then push them in my direction. Or if you are a seasoned performer and you can give me advice on what to do next… I feel a little bit like I need some kind of Gandulf style guidance here.

I met a guy the other day who had been to see about 103 shows over the past couple of weeks. He was excellent, and I signed his top (which other performers had also signed.)

And Jade found a picture of me from when we first met. When I left Los Campesinos! and became a HMV Christmas temp. Look at how happy I am. 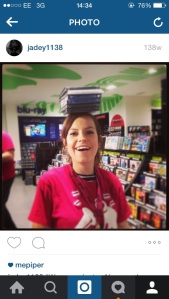 And yesterday I met this guy. 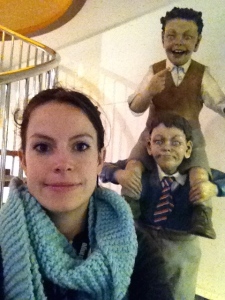 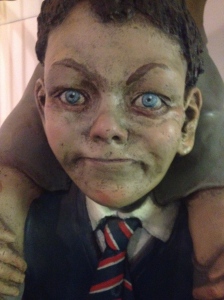 Erm, what else. Not much else to say. I didn’t get to see Richard Soames show, which saddens me, but tomorrow I have a ticket for Austentatious and I will be one of those audience members how accepts all the flyers from the all the flyerers and tells me that it’s nearly over, and they have done a bloody good job.