Just been working on my press release for the Fringe – I shall be performing at The Stafford Centre from the 18th – 30th of August as part of the PBH Free Fringe.

This is my first attempt at a press release, and so far I think I am nailing it.

To (your name here)

I know your (publication here) covers the Fringe extensively and has like, 3000 shows you could review, but it would be totes amaze-balls if you could come and see my one person show about estranged fathers and Star Trek, called  “Jean-Luc Picard and Me.*”

I know the other shows you will be invited to see will have big-name comedians in and my venue is like, a bit out of the way, BUT I own the rights to all Jean-Luc Picards baby photos and will be showing them exclusively during the performance. Here is a sneak peek. 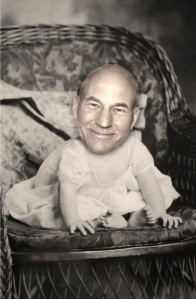 You like that? Well then let me give you several more reasons to come and review what is surely the most zeitgeisty show of the Edinburgh Fringe….

My show will be great because:

– There is a paper mache head of Jean-Luc Picard on stage at all times, which started out looking lovably crap but after excessive wear and tear, now looks like a melted Richard O Brien as reimagined by David Lynch.

– There is a bit where it seems like I might do a cry on stage, and everyone loves a good stage cry, because it’s super dramatic, and although I haven’t managed it yet, one day I will cry and it will be exactly like that scene in “Love, Actually” where Emma Thompson gets that Joni Mitchell album from her cheating bastard husband played by Alan Rickman, (which by the way she probably already had since she was such an uber fan – good one Alan Rickman or should I say Alan Prickman), and she sort of cries but knows that she has to carry on for the sake of the kids, so it’s all very elegant. I will cry just like that.

– I borrowed the money for the Fringe advert off my mum, and I have to pay her back because she has expensive taste in wine and hair products (naturally curly hair – total mare,) so some coverage would get punters in, who would hopefully throw some change in my pocket and stop my mum sending the boys round to break my kneecaps.

I have been told that most press will stop reading a press release around this point, so here is another exclusive picture from Jean-Luc Picards family album to keep you interested: It’s his Mere and his Papa.

– I have done some super cool stuff in the past, which I talk about on stage, like getting into the final of the Butlins Bognor Regis Talent Contest with my seminal version of “The White Cliffs of Dover”. I didn’t win the contest, but I did win the hearts and minds of all the old people at the show, which makes me the infinitely richer person.

– It’s educational. I excessively swear at least once in Klingon.

– I manage to turn a tactical battle manoeuvre invented by Jean-Luc Picard into a pick up line. If you want that pickup line tested on you (who wouldn’t) sit in the front row with your press cap on.

I am interesting because:
– I am like, totally verified on twitter, and due to this people mistake me for Ellen Degeneres. Like The Emmys. Who tweeted their congratulations at me on my nomination. That was a weird twitter day.

– I use to be an “indie rock star” and once had dinner with Neil Gaiman. I dine out on these stories quite excessively during the show. And in my life.

– I have a temp job at a hospital where I type letters about incontinence and they think I am super cool because I am doing a show at the Fringe, so I am not only creative but have a huge medical knowledge about urethras.

My show is unique because:
– I mention Whoopi Goldberg, so even if you are bored you can re-watch Ghost in your head and remember how good she use to be. She got a frigging Oscar for that! No one remembers that.

– Patrick Stewart has been tweeted several times about the show and has so far ignored it, probably because this is not the weirdest thing a Star Trek fan has ever done.

Thanks for taking the time to read this. I hope you have a lovely day.

*Sometimes I forget to put the dash in between Jean and Luc, so I am super proud of myself I remembered this time. I hope you appreciate it too. Especially if you are French. Although you might have found the whole French captain with a British Accent thing kind of offensive and weird, but British seems to the default neutral accent for most things set in the past or in the future. Like anything set in ancient Rome – British accent rather than a Latin one. Not that anyone knows what a Latin accent sounds like. But thinking about it, probably a bit Italian.