Firstly, big fan – I use to watch your sitcom in the 90’s, and whilst I was too young to get all the jokes, I assumed since we had the same name it was a template for how my life would turn out, that the TV, rather than being a box presenting me with Friday night fiction, was actually a window into my future.

It seemed I had much to look forward to – low stake whimsical adventures, getting my heart broken by Laura Dern, voicing a fish in a pixar movie and eventually marrying someone from Ally McBeal (I had my fingers crossed for Gil Bellows, or worse come to worse, Jon Bon Jovi.)

But I was wrong, Ellen and would even go so far as to say I was mislead. As it turns out life is a cruel bitch, Laura Dern never returns phone calls, fish can’t talk and Gil Bellows has a forehead you could balance cheese on, which just isn’t my bag.

I felt like a failure Ellen. I felt like the Danny Devito to your Arnold Schwarzenegger. The Billy Baldwin to your Alec. The Will Arnett to your Amy Poehler.

I would introduce myself to people at parties, and too often they would say, ‘Helen?’ and after I corrected them they would then say ‘Ellen? Like Ellen Dengeres? Are you funny then? Do you have your own primetime TV show too?’

I would shake my head sadly, tell them I had no jokes, and as they walked away I heard them whisper, ‘more like Ellen Degenerate! HA.’

I don’t know if you have noticed me on twitter, Ellen (how could you not,) but just like you, I am verified.

It’s because I was in a band once, Ellen. I use to slappa da bass.

We toured the US, and we even met Jason Bateman once. You know Jason? Portia’s mate. You probably had him over on a Sunday for a game of charades and a sauvignon blanc.

I asked him about you.

‘Tell me what her eyes are like Jason,’ I said, ‘are they the virbant blue of the White Walkers, or more of the clinical blue of the blood in the tampax adverts?’

He responded by taking off one shoe, and gesturing to his proud blue sock.

‘Not only that,’ he said, giving me his sock to examine, ‘ but she sure knows how to darn up a sock.’

I marvelled at the fine cross stitch work, the lack of holes, the tightness of the fit.  It was the most beautiful thing I had ever seen. I said, ‘you’re right Jason. That is some precise needle work. ‘

Due to this encounter with Jason Bateman I got a blue tick next to my name. A small parade was held in my honour in the Surrey village where I grew up, and my mother finally allowed me to rejoin the family, after years in Siberia when I admitted I thought Aliens was a better movie than Alien.

‘You have no right to be called Ellen. That’s where she did us most proud!’ She said as she pushed me out the door, throwing a Budgens Essentials pack of rice at me.

‘For sustanance!’ She said, as it hit me in the face.

I thought the blue tick was great, because not only did it reunite me with my family but it got me discounts at off licenses. ‘How much is the gin now?’ I would say, holding up my smart phone with the twitter app open and gesturing to the blue tick. ‘The same as before,’ they would say, because they didn’t want to show their joy at having a verified blue tick in the shop. I would then wink at them, and walk off without paying.

I had 5% more friends, my hair was bouncier, and my skin! It was like I was 22 all over again. I was living a version of the dream…. until I started getting mistaken for you. 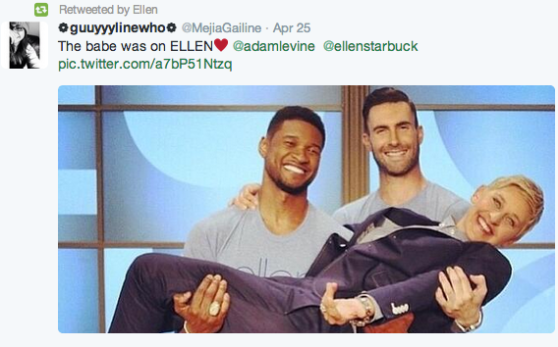 Now to start with it wasn’t too bad and tended to be infrequent – mostly teenagers begging me to let One Direction and Justin Bieber come onto the show Ellen. (I don’t have a show Ellen, unless this so called life is my show, but I don’t think that to be the case.)

But, not wanting to be rude, I informed them that you were probably not the booker for the program, and it all depended on Harry Styles availability and whether he had actually had anything to promote. They normally ignored me after that, but I like to think I saved you some menial admin, and gave you some much needed time to darn up socks for the Arrested Development gang.

As you can see I retweeted most of the things sent to me, out of politeness, as they normally said pls.

I was confused as to why they did not notice the lack of similarity in my twitter picture and yours, but mistakes are easily made, especially when it comes to the blue tick.

But then there was Oscar night.

You tweeted a selfie with all those plucked and pruned beautiful people, and the internet exploded. As did my twitter.

(Personally, I thought watching you organise a photo shoot was marginally less fun than watching my mum’s attempts to take a selfie, and accidentally taking a photo of the wall instead.)

In the morning, pursuing my social media outlets I noticed I had an extraordinary number of tweets, retweets and favourites. I nearly fell of the toilet Ellen. It was so shocking. I had the Emmy’s tweeting at me Ellen! The Emmy’s!

Can you imagine how exciting that kind of action is for a freelance writer trying to get her first big break!? I thought to myself, why on earth are The Emmy’s tweeting at me Ellen? Had they read my blog? Had they read my piece about the best names for periods AND LOVED IT? Maybe it was The Huffington Post pieces, in which I make fun of The Huffington Post? Or maybe they thought I looked like all those celebrities if they were all spliced together in a Fly style machine? Or maybe they wanted me to pick up their dry cleaning? I COULD DO THAT.

I pictured fur coats Ellen, book deals, diamond earrings and one real nice pen Ellen. I saw my future laid out Ellen, and it was wonderful, because finally, The Emmy’s had noticed me.

I wondered, ‘does Ellen MacArthur get this kind of shit?’

Although this is not the first time I have been mistaken for you Ellen, it was a whole new can of worms, and since then it has been getting steadily worse.

I had a Texan women telling me that Portia is now her wife, a confused teenager telling me how much they loved the pillow you gave some rock star called Demis, and occasionally people live tweeting their commentary of the show at me.

But I am sure I can not be alone in this frustration. I am sure you are constructing a similar open letter to me as we speak, a letter filled with complaints about all the tweets you have been getting for me. I imagine you have had a slew of people sending you tweets like ‘hi@ellenstarbuck weren’t you in that band once?’ or ‘hi@ellenstarbuck I loved how you sailed around the world and…oops wrong ellen’

Now, I don’t mean to complain to you, because I am fairly certain we would get on in real life. I can see us sharing a cobb salad and chatting about the amount of times we have been in Starbucks, waiting for our drink, not realising the barista shouting ‘coffee for HELEN,’ was actually waiting on US.

I can see us pushing back our chairs in unison and screaming ‘lets DO IT,’ before heading to a Starbucks and falling on the floor laughing as the poor barista shouts ‘Caramel Macchiato for HELEN!’

But I take some relief that whilst I lag far behind you, there is always Ellen Page.

I believe she supersedes us both with her specialised shuffle walk, smart acting decisions and the fact she is freakin’ Kitty Pryde.  I imagine J-Law has often drunk dialled you, asking if you want to get some late night popeyes, smoke a fat one and trip over some stuff, before apologising and hanging up with a ‘oops wrong Ellen.’

I imagine you sit down, and Portia, noticing your forlorn expression puts her sock in your face and gently asks ‘do you want to darn this?’

I imagine you nod, smile and get out your box of sewing equipment, before thinking to yourself ‘it’s good to be an Ellen.’

Looking forward to your reply, and inevitable apology fruit basket.